There’s nothing better than a warm, cozy fire in the fireplace but there’s nothing worse than the “campfire-in-the-living-room” smell that can sometimes occur afterwards. Understanding some of the causes for a stinky fireplace will help prevent the problem. There are several key causes for fireplace odor issues.

Sometimes a smoking problem is so subtle that you may not even realize it at the time of the fire but then you notice a bad odor the next day. That’s because smoke rises to the highest part of the house at the time of the fire but by the next day, that smoky odor drifts down into your breathing range. This smell can be absorbed into carpeting, furniture and window coverings so it’s important to avoid the smoking problem in the first place. To prevent smoking problems, check out our blog post on the Top 10 Smoking Problems and their Respective Solutions.

In addition, if you’re using your fireplace at night, the damper has to stay open all night. Hours later, halfway through the night when the fire is down to just burning embers, the chimney loses its draw, especially if the furnace turns on, pulling air down the chimney, resulting in the smoke and resulting odors coming into the room. To prevent this night-time issue, make sure your fireplace has tight-fitting glass doors.

Animals love your chimney because it is a dark place, safe from predators, but once animals enter chimneys, it’s extremely difficult for them to fly or crawl back out on their own. This might mean your chimney will smell of a

nimal feces or worse, a dead animal. In fact, due to federal animal protection laws, there are heavy fines of up to $15,000 for removing live migratory birds without special animal-removal permits. To remove an unwelcome animal from your chimney, contact an animal removal organization with the proper permit, but the better way would be to avoid birds and other critters from using your fireplace as their new home in the first place by installing a chimney cap.

A dirty chimney can cause a bad fireplace odor because of the smoking problem but also even when the fireplace is not in use. Downdrafts push air down the chimney, bringing with it the smelly particulates from the dirty chimney and sending a campfire smell into the room. Having a CSIA Certified Chimney Sweep to sweep the chimney will help, but keep in mind that creosote can absorb into the porous material of a flue lining so even if a chimney lining is meticulously swept, there may still be a fireplace odor. Keeping the damper closed and installing tight-fitting glass doors will help.

Burning wood that has not been aged long enough or has been left out in the rain will create a smokier fire which can cause a rank odor. Some people can also be very sensitive to the petroleum odor of certain brands of prefabricated logs. In this case, change your fuel type and make sure that wood is aged and kept dry.

5) Pressurization in the home

To make our homes more energy efficient, builders are making houses “tighter.” Tight homes don’t make for properly-operating fireplaces. Fire needs oxygen, a great deal of oxygen, and it pulls it from the room. If a fire can’t get that oxygen because your fireplace is competing with other systems in the home such as furnaces, clothes dryers, bathroom exhaust fans or kitchen hoods, pressurization problems will occur in the home and can create a smoking problem or fireplace odors. Even if the fireplace isn’t in use, these other systems will draw air down the chimney, pulling down the particulates from a dirty chimney or odors from the ashes in the fireplace. Wind-driven downdrafts will also create this effect. Even during the summer, when fireplaces aren’t being used, rainy weather or high humidity can bring fireplace odors into the house. We recommend closing the damper, keeping the firebox clean, installing tight-fitting glass doors on the front of the fireplace or creating another method to bring make-up air into the home. 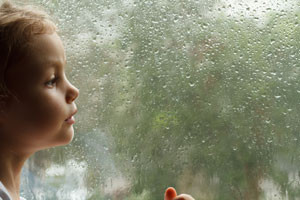 Rain falling down a masonry chimney doesn’t land directly in the firebox. Instead, because of the way a masonry chimney is designed, this rain lands in an area behind the damper called a smoke shelf unless the chimney has a cap. The rain collects in the smoke shelf until the water eventually evaporates. This rain water mixes with soot and can have a rancid, musty odor. This is another good reason to have a chimney cap on the top of the chimney.

Fireplace odors are a common problem but with a little knowledge, odors can be avoided, decreased or completely eliminated. Reduce smoking problems, have your chimney swept regularly, install tight-fitting glass doors, provide make-up air in tight homes to prevent pressurization problems, and install a cap to keep out rain and animals. Then sit back and enjoy your fireplace without the smell of regret the next day. After all, the smell of a campfire can be enjoyable on a camping trip, but not in your living room!