During usage of the fireplace, the smoke goes up the flue (the passageway or pipe). The smoke coats the flue with a by-product called creosote. With usage, the creosote buildup becomes thicker as the flue becomes smaller. This coating is not only dangerous because it’s highly flammable, but will create a smoking problem that will get progressively worse as the creosote builds up and the flue becomes narrower. The Chimney Institute of America (CSIA) states that if the build-up of creosote is any more than 1/8″ in the flue, the chimney must be swept.

Obstructions inside the Chimney and/or Plugged-up Chimney Cap 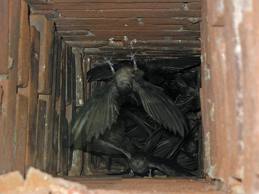 The chimney should be checked for any obstructions inside the flue pipe, such as bird nests, tree branches, leaves, beehives, or even the missing volleyball. (Yes, we really do find balls in chimneys!) Also, with usage, the chimney cap will get plugged up, especially if you burn wet wood or lots of paper.

Before lighting a fire, always make sure that the damper is open. Don’t laugh–a closed damper happens more often than you think!  If you’re not sure if the damper is open or closed, shine a flashlight inside the fireplace, up the flue. If the damper isn’t fully open, do not even attempt to light the fire.

SOLUTION: Always check the damper each time before starting a fire. As chimneys get older, sometimes the damper will become difficult to operate or may even seize. If the damper does not FULLY open, have it looked at by a CSIA Certified Chimney Sweep. 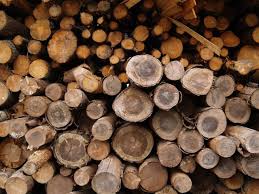 inside the flue pipe. According to the Chimney Safety Institute of America, ideally, the moisture content of firewood should be between 15% and 25%. A good rule of thumb is to have firewood aged between six months and a year. Firewood should be split to dry out faster. Dried wood that is wet from rain and snow will re-hydrate so be sure to cover up the firewood pile during wet weather. In addition, improper usage of the prefabricated logs (such as Duraflame or Pine Mountain) can create a smoking problem.

SOLUTION: Make sure that firewood is aged at least six months and keep the wood dry during the winter.

When it’s cold outside, there’s also cold air inside the flue pipe and that cold air is very heavy, dense air, especially if it’s raining outside. That cold air acts like a plug. If 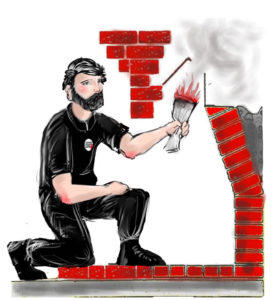 you light a fire, the smoke can’t rise but instead will come into the room where you’re sitting. That cold air in the flue will eventually warm up on its own during a fire, but not before smoke comes into the living area.

SOLUTION: During cold weather, always “prime the flue” before starting your fire. To do this, place the wood on the fire grate as far back as possible in the firebox. Open the damper. Roll up a piece of newspaper like a “wand.” Light the end of the wand and hold it up near the open damper for a minute or two to warm up the air in the flue. When the flue is primed, you should see the smoke from the wand being drawn up the flue. At that point in time, light the fire.

If you have the furnace turned on at the same time as having a fire in the fireplace, you may experience a smoking problem. This is especially true when the furnace’s 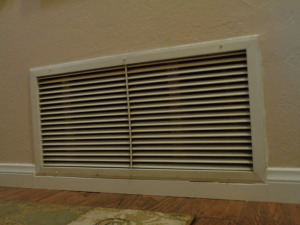 air intake (cold air register) is close to or in the same room as the fireplace. Other systems like kitchen hoods, bathroom exhaust fans and dryer vents can also contribute to this problem. This is especially true if you have made your house more airtight with new vinyl windows and doors as well as tight weatherstripping.

SOLUTION: Do not have the furnace on at the same time as the fireplace.

smoking problem when the fireplace is in use. A fire requires oxygen and in a tight house, there’s a limited amount of make-up air.

SOLUTION: Cracking open a window or sliding door close to the fireplace will give the fire the oxygen that it needs for the combustion process, and will also help the smoke vent up the chimney.

A house located near

a canyon or a hillside will be more prone to gusting winds that can create downdrafts. Also, homes located close to the ocean will be prone to the prevailing winds.

SOLUTION: A specially-designed wind cap can sometimes minimize the downdrafts. Note that these wind caps cannot be installed on prefabricated fireplace systems.

A masonry chimney is built to a certain formula, having to do with the height and width of the firebox opening, the height of the chimney and the diameter of the flue pipe (among other factors). If any of these factors are not correct, the fireplace may be prone to smoking problems. Also double-sided, L-shape or see-through fireplaces are always more prone to smoking problems.

least two feet taller than anything horizontally within ten feet. This includes houses located too close together, two-story additions (when the chimney is on the first story), or trees. In building terms, this is called the 3-2-10 rule.

SOLUTION: For a one-sided fireplace opening, sometimes installing a smoke guard will resolve the problem. A smoke guard is a piece of metal that extends the full 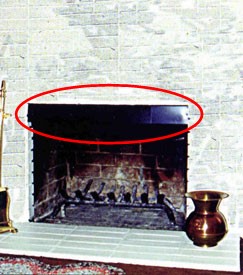 width at the top of the firebox opening and lowers the firebox opening by 4″, 6″ or 8″, to encourage the smoke from the fireplace to go up the flue instead of in the room.  For multi-sided fireplaces, closing one side of the glass doors may reduce smoking. (Note: Never close both sets of glass doors on a two-sided fireplace at the same time during a fire.)  As a last resort, sometimes the only solution is to have a chimney mason raise the height of the chimney.

Two systems in one chimney structure can create smoking problems if the two flues are at the same height at the top of the chimney stack, side by side. As one fireplace is used, the smoke goes up and as it exits the top, the wind can drive the smoke down the other flue pipe, like a siphon effect.

SOLUTION: Slightly raise one of the two flues so that they aren’t at the same height at the top of the chimney.

What NOT to do if you have a smoking problem…

Time and time again, homeowners install artificial gas logs to solve a fireplace smoking problem.  This is NOT a viable solution and can actually create a more dangerous situation!

This is not a complete list of causes for smoking problems but certainly the most common. Using the process of elimination, trying different solutions one at a time, will narrow down the cause so you can enjoy your fireplace to the fullest. Future blog posts will go into further detail on each of these smoking problems.  Keep in mind, the best place to start is to have a CSIA Certified Chimney Sweep out to evaluate your system, sweep if necessary and give you advice on how to resolve any smoking problem that you may be having.