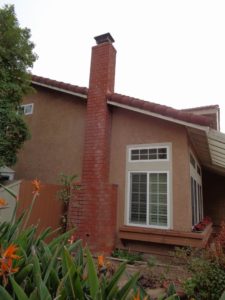 Just like automobiles that have different manufacturers and models, the same goes for fireplaces and chimneys.

The History of the Masonry Chimney

These masonry systems have been around for many centuries and are tried and true. They are constructed on-site with bricks, stone, concrete blocks and mortar. Masonry systems are built by hand, brick by brick. If the system is built properly and maintained regularly and there are no extenuating events (such as earthquakes and wildfires), they will last a century or more. In fact, it’s not uncommon to see masonry chimneys still in use in houses built in the 18th and 19th centuries.

Unfortunately, due to the high cost of labor, these systems haven’t been constructed since the mid-1980s here in Southern California except for in high-end, custom-built homes.

For a fireplace to work properly, there is a formula involved in building a masonry chimney system. Some of the factors in this formula have to do with the height of the chimney, the diameter of the flue pipe, and the height/width of the firebox opening. If a system isn’t built properly, the chimney will never draw properly and will have ongoing smoking problems.

Components of a Masonry Chimney and Fireplace

It’s important to know the various components of a masonry chimney:

Flue cap – The chimney cap consists of spark arrestor material with a solid lid. It provides three primary benefits: 1) It prevents embers from getting on the roof; 2) It prevents birds, rodents and other critters from entering the home through the chimney; and 3) Flue caps with solid lids will also prevent most of the rain from coming down the flue lining. Without the solid flat lid of the cap, rain would land in the smoke shelf which may cause damage to the damper and may deteriorate the firebox.

Crown – The crown is a concrete or mortar surface at the very top of the chimney structure. Its purpose is to direct water 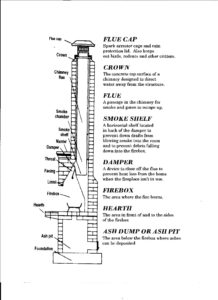 Flue – The flue is the passageway from the firebox to the top of the chimney structure. In a masonry chimney, the flue is lined with a flue lining typically made from terra cotta, pumice or metal.

If the flue lining is cracked, broken or if the mortar joints are missing between the flue tiles, the system cannot be used because of heat transference or deadly carbon monoxide leaking into the house. There are three primary methods for repairing cracked flue linings–1) relining the system with a stainless steel pipe; 2) installing a stove insert with a metal pipe to the top of the chimney structure; or 3) a poured cement, cast-in-place system.

In addition, older systems may not have a flue lining at all (which is referred to as an “Unlined Chimney”). In this case, the system cannot be used until it has been repaired.

Flue tiles – A flue lining inside a flue is basically a vent pipe. This pipe is not one solid pipe. In most cases, the pipe (typically terra cotta or pumice) is made up of pipe sections called flue tiles. Each flue tile (pipe section) is anywhere from 12″ to 24″ tall. In between each flue tile is the mortar. There should not be any gaps or voids in the mortar joints.

Smoke Shelf – A horizontal shelf located behind the damper to prevent down drafts and to collect debris that has fallen down the chimney.

Damper – The device that opens and closes so that heat is not lost from the home when the fireplace is not in use. Some dampers can be installed at the top of the chimney flue.

Firebox – The area of the fireplace where the fire is burned.

Exterior Hearth Extension – The area that extends in front of and to the sides of the firebox opening. The exterior hearth extension should be made from non-combustible materials and should be differentiated from the rest of the room’s flooring.

Ash Dump – Not all masonry systems have an ash dump. This is the area below the firebox where the ashes can be swept down into. A firebox with an ash dump will typically have a metal plate in the firebox’s floor. This metal plate can be opened to brush the ashes below.

Clean-out Door: The clean-out door is located on the outside of the chimney structure near ground level to clean out the ashes from the ash dump.

Before the early 1900s, masonry systems were not constructed with a flue lining. We refer to those systems as “Unlined Chimneys.” According to the Chimney Safety Institute of America, “Never use a chimney that does not have a liner or has a damaged or improper lining.” [Public Safety Bulletin issued by the Chimney Institute of America: The Importance of Flue Lining in Your Masonry Chimney.] Here in San Diego, however, we have seen unlined chimneys as late as the early 1960s.

When these unlined systems were originally built, the masons used a material called parging (like stucco). They hand-coated over the bricks and mortar joints inside the chimney flue. With time, age and usage, this parging material has worn away, leaving the bricks and mortar joints exposed. In addition, back then the masons used a lot of sand in their mortar. Eventually, these mortar joints disintegrate, leaving gaps and voids. This creates a potentially dangerous situation.

If the unlined chimney is structurally sound and there are no other issues with the system, the system can be “relined.” This is a method where a stainless steel pipe is installed inside the chimney structure. However, if the metal lining is not installed properly or is undersized, the fireplace can be dangerous and/or will not ever draw properly.  Relining a chimney should only be done by a licensed and qualified chimney professional.

Make sure to use a CSIA Certified Chimney Sweep to inspect your system and sweep it if needed. If your masonry chimney is maintained, it will give you warmth and comfort for many years, decades and maybe even centuries to come.

Caveat: Chimneys are built differently in various regions throughout the country. What is common in one region may not be common in another. This information provided here is based on what we see in Southern California.

1 thought on “What is a Masonry Chimney?”