Imagine this scenario: You have spent a great deal of time looking for that perfect home. You did your due diligence. You had the proper home inspections and then made the single most expensive investment of your life. After moving in, you decide to get the chimney inspected and swept. The chimney sweep comes in and, within just a few minutes, has discovered that your chimney is a Rampart General Pre-Cast system.  And, because of a major defect, the system can never be used.  Because most home inspectors don’t have specific training in this system, they oftentimes don’t recognize the potential issues inherent with this type of chimney.

Unfortunately, this scenario happens all too often.

What is a Rampart General Pre-Cast Chimney?

Rampart General is the name of the manufacturer of the chimney system. Hence the nickname for these systems is “Ramparts.”

Pre-Cast describes how the chimney was made. The system was manufactured in Santa Ana, California from a cast or a mold, with a 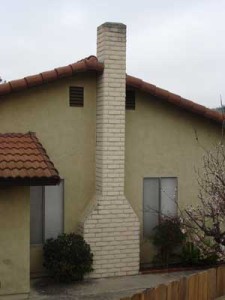 combination of calcium aluminate cement and lightweight aggregate. The cast was cured and then transported to various parts of California.

At the construction site for the home, a concrete pad was poured. The transport truck simply tilted the chimney into place by using a heavy chain and t-bar down the inside of the chimney. Some chimney professionals refer to these systems as “tilt-ups” for that reason. In some cases, the truck dropped the chimney while placing it on the pad, resulting in damage to the system.

The mold or cast for the chimney structure was designed to make the chimney appear that it was constructed with bricks and mortar. To the untrained eye, the system appears to be a normal masonry system. We have found that some home inspectors who are not familiar with this system will call the system out as a masonry system but in fact, it’s anything but.

How to Identify a Rampart General Pre-Cast System

These systems are located in developments throughout California. Ramparts can be found in homes constructed anywhere from the mid-1960s to the early 1990s.

The chimneys (with few exceptions) will look like an off-white color brick. Some homeowners may think it’s a painted brick but in fact it’s the color of the calcium aluminate cement. If it’s a different color than the off-white, someone has painted the chimney.

The chimneys (with few exceptions) will be located on an exterior wall of the home. That’s because the chimney was tilted up into place.

In many cases, the exterior chimney appears to have a very narrow chimney above the shoulders of the chimney, much narrower than a masonry chimney.

Here’s a local news report about these damaged systems.

There are three major irreparable problems with these systems:

The primary problem is the potential for having cracks in the insulation plate, also referred to as the breast plate, which is located directly above the opening inside the firebox.

In the almost two decades following our training in Rampart General Pre-Cast systems, we have found that approximately 60% of the systems that we have inspected here in San Diego had a cracked insulation plate.

Even hairline cracks in the insulation plate are dangerous because they will widen or expand with heat, and then allow this heat to transfer through the cracks to combustible materials used in construction around the fireplace.

According to Dale Feb of Fireplace Investigation, Research & Education Service, the leading expert in the country for this system, “Based on the manufacturers’ specifications, the ICBO evaluation report and the acceptance by the local building official of these two documents, we are not allowed to deviate from the construction, installation or repair requirements stated within these written details.”

In other words, repairs such as patching, relining, or stove inserts are not viable solutions to repair Rampart General Pre-Cast systems. These chimneys were UL-Listed and approved in their original design and no modifications are permitted.  Relining or installing a stove insert would be considered a modification and therefore would not be approved under the UL listing.

No repairs have been approved by the manufacturer or by the Superior and Municipal Courts of California who have made rulings in cases involving Rampart General Pre-Cast systems.

Unfortunately, Rampart General, the company that constructed these chimney systems is now out of business so there is no recourse against the manufacturer. 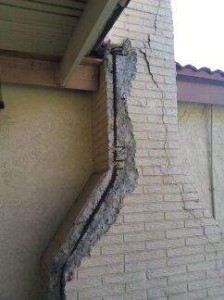 The second issue that we find is the exterior chimney structure will often be cracked as well. These cracks appear as long, deep, wide vertical cracks in the 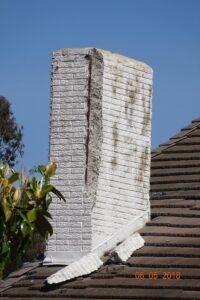 exterior chimney structure. They appear along where the reinforcement (rebar) steel is located within the structure. These cracks are not subject to patching and eventually, the chimney will lose its structural integrity.

We are now finding that the cracks are becoming so long, deep and wide, that the chimney is literally falling apart.  In this case, we recommend tearing down the entire chimney in order to avoid damage or injury due to falling concrete.

here in San Diego is that the flue lining can be damaged or cracked. The flue lining is the passageway inside the chimney structure.

Since the chimney was constructed horizontally in a cast or mold, sometimes the cast failed to contain the concrete during the construction process, and “blew out” the flue tile.  This creates a concrete blob inside the flue lining which makes the fireplace system completely unusable.

Because the system cannot be relined nor an insert installed, the chimney can no longer be used.

Systems with cracked insulation plate are not subject to patching. Do not allow anyone to talk you into any repairs of these conditions or resolve the problem by installing a stove insert into the chimney. This could result in a potentially dangerous fire and, since the system was modified against the U.L. listing, there is a possibility that your insurance company would not honor a claim for the damage.

Whenever you purchase a home, always have a separate Level 2 Chimney Inspection.  To find a qualified chimney sweep, go through the Chimney Safety Institute of America. If you are buying a home with a Rampart General Pre-cast system, the question to ask your home inspector or chimney professional is if they have been specifically trained in these chimney systems by Dale Feb, the leading expert in the country on Ramparts. Not all home inspectors and not all chimney professionals have this specific training and therefore will not know about these systems.