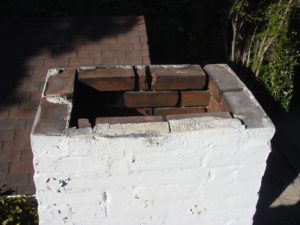 As a chimney sweep, the most important part of a chimney that we inspect is the flue lining. In many older homes, there is no flue lining. This type of chimney system is referred to as an unlined chimney. According to the Chimney Safety Institute of America, “Never use a chimney that does not have a liner…”

What is an unlined chimney?

Simply stated, an unlined chimney is a chimney without a flue lining. The flue lining is a pipe that can be made from terra cotta, pumice or stainless steel. The flue lining should go from the very top of the chimney down to the bottom, to the smoke chamber above the firebox.

Depending on the region of the United States where you live and what building codes were in place at the time the chimney was built, flue linings have been required since the early 1900’s. However, here in San Diego, we see unlined chimneys as late as the 1950’s. In the 2016 California Residential Code, Chapter 10 – R1003.11 it states specifically, “Masonry chimneys shall be lined.”

In the 1940’s and again in the 1980’s, the National Bureau of Standards performed tests on unlined chimneys. After testing for just 3½ hours, the woodwork adjacent to the unlined chimney caught on fire. The test was abandoned at that point because the unlined chimney failed to perform its function. The researchers concluded that “building a chimney without a lining was little less than criminal.”

How do you know if you have an unlined chimney?

A CSIA Certified Chimney Sweep will not only be able to determine if your chimney is lined or unlined, but will also be able to inspect the condition of the flue lining if you have one. Again, the flue lining is the most critical component of your entire chimney system.

How to repair an unlined chimney

Assuming the chimney is structurally sound, the chimney can be relined, although new methods may be found in various parts of the United States.

Relining a chimney is where a metal pipe is installed inside the chimney structure to become the new flue lining. In most cases with these older systems, the firebox is rebuilt at the same time. Typically a top-mount damper is installed along with a flue cap.

Prices for relines vary from region to region. Chimneys in poor condition may also require additional extensive repair before relining.

If the unlined chimney is not structurally sound, a reline may not be a consideration. In that case, tearing down the chimney and rebuilding it with either a new masonry chimney or installing a prefab system would be the only other option.

First things first, have your chimney flue lining inspected by a CSIA Certified Chimney Sweep to make sure you don’t have an unlined chimney!

3 thoughts on “Problems with an Unlined Chimney”