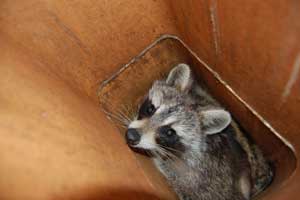 Many people think that the sole reason for a chimney cap is to keep the embers from starting the roof on fire; however, there are so many other benefits to a chimney cap, even during the hot summer months.

A chimney cap will keep the critters out!

About a month ago, I received a panicked call from a woman who was looking out of her living room window and saw a raccoon scurrying along her neighbor’s roof and entering her neighbor’s chimney. After witnessing this, she immediately called us to install a chimney cap on her own chimney. It’s not uncommon for raccoons to enter chimneys, even in urban areas. She even took a photo of the raccoon and sent it to me! (See photo below.)

Get to know these creatures…

Female raccoons will seek out open chimneys to climb down and create a nest to have their babies. In fact, 85% of the time when there’s a raccoon inside a chimney, it’s a female raccoon. The smoke shelf in the chimney (behind the damper) provides a safe, dark place away from predators. Male raccoons are a major predator to the babies because males consider the kits as more male competition.

Raccoons are more active during the spring, summer and autumn and tend to be nocturnal animals. Females usually give birth in April or May and will have up to eight kits at a time but typical litters of two to four are more common. Once the babies arrive, removing a raccoon becomes more difficult because you’re then removing not only the mother but her kits as well.

When the kits have reached five months of age, kits will venture out with their mother to learn how to climb and hunt. Kits become independent anywhere from 8-12 months of age.

The downside to raccoons

Raccoons carry dangerous infectious diseases such as Raccoon Roundworm, an intestinal roundworm found in their droppings that can infect other animals as well as humans. Raccoons can also be infected with rabies. They have sharp teeth and will typically not attack unless they feel threatened or cornered or if they feel their kits are at risk.

Mama raccoons are fiercely protective of their kits so removal should be done by trained animal removal professionals! Here’s a comprehensive nationwide directory for professional wildlife trappers.  These animal removal experts can use special trapping systems that can be mounted to the top of the chimney flue.

Do not light the fireplace to smoke out the raccoon! Not only is this inhumane but the smoke and heat will kill the mother and kits, making it harder to remove the dead animals from the smoke shelf area. Also, to light the fire, you have to open the damper which may encourage the raccoon to come into the home instead of up the flue pipe.

Use a rope with knots tied about one foot apart and throw the rope down the chimney, tying the rope to the top of the chimney. This rope needs to be long enough to reach the bottom of the chimney into the smoke shelf behind the damper. The rope will help the raccoons and the kits to climb out of the chimney. Keep in mind that a mama raccoon can be heavy so make sure the rope is strong enough and tied off properly at the top.

Place repellent in a bowl inside the firebox.  Repellents can be Cayenne pepper, or a bowl of ammonia, or a commercial dog or cat repellent such as “Dog-Gone” or “Boundary” which can be found at most pet stores. If you have a tight damper, the smell may not penetrate into the smoke shelf area, in which case you may have to throw the repellent down from the top of the chimney.

After the raccoon leaves

Once a raccoon leaves the chimney, which will typically be at night, cover the top until a chimney cap can be installed. Be sure that all the kits are gone as well before covering the top. You don’t want to trap the babies inside.

In addition to raccoons, chimney caps will keep out birds, roof rats, squirrels and other critters. Unfortunately due to the wide mesh of the cap that is required by code, chimney caps will not keep bees from entering the chimney to build a hive.  Here’s more information about bees and bee removal.

Chimney caps not only prevent animals from entering your home through the chimney, they prevent embers from landing on a roof or in your trees, causing a fire. The caps with a solid lid at the top will also prevent most of the rain from coming into the flue which can deteriorate the chimney from the inside out.

Contact a CSIA Certified Chimney Sweep to install a chimney cap today, before you get an unwelcome critter in your chimney!