Why have a chimney cap? Well, let me tell you a not-so-funny, but very ironic little story.

A few years ago, a man called me up asking about a chimney cap to protect his new roof. He was burning wedding photos after a somewhat bitter divorce. A short time later, his neighbor was banging on the man’s front door telling him that his roof was on fire. Apparently, the burning embers from the photos landed on his roof and caught the roof on fire. Thanks to the observant neighbor, the firemen arrived in time to save the house, although there was major water damage. If he had had a chimney cap BEFORE he used his fireplace, he would have saved a lot of money and heartache.

What is a chimney cap?

Caps are called “chimney caps,” “rain caps,” or “flue caps,” but these are all 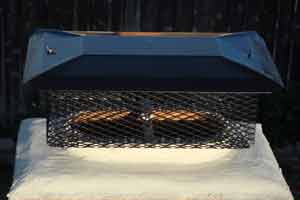 different terms for the same thing. They look like upside boxes with the spark arrester mesh around the four sides of the box and the top is typically a solid metal lid to prevent most of the rain from coming into the system. Ideally, the lid is removable to make it easier for the chimney sweep to maintain the chimney.

Fire Safety– Here in Southern California where wildfires are always a major concern, a chimney cap is essential. Fly-away embers can land on your roof, on your neighbor’s roof, on dried leaves and landscaping, patio covers, fabric canopies, or cars. The spark arrester mesh on the chimney cap prevents most of these dangerous embers from escaping.

Critters– A chimney without a cap is like an open door for any unwelcome critter to come into your home through the chimney. As far as the critter is concerned, you just welcomed it into your home. It’s not uncommon for birds, raccoons, squirrels, snakes, and even roof rats to make your chimney their home. If an animal creates a nest inside a

chimney, it will create a blockage in the chimney, making it unsafe to use the fireplace. On another note, if an animal dies inside the chimney, the smell will be horrendous, making the house unlivable for a period of time.

Rain– A chimney cap with a lid will prevent most of the rain from coming down the chimney. Chimneys aren’t built straight up and down. If they were, every time it rains outside, the rain would come straight onto your fire. Chimneys are typically built with an offset so the rain lands in the smoke shelf area behind the damper. The water sits in the smoke shelf, up against the metal damper plate, until the water either evaporates or it seeps into the backwall of the firebox. Rain will deteriorate the chimney from the inside out and will cause premature damage to the metal parts of your system, such as the damper. Caps will save thousands of dollars in preventable chimney repairs.

Downdrafts– Houses built on hillsides, in canyons, along beaches and in mountain areas are particularly prone to downdraft problems. A specially-designed wind cap can prevent these downdrafts.

Pre-fab fireplaces and free-standing stoves automatically come with and are listed with very specific caps already. Installing an incorrect cap on these systems will not only void out the U.L. listing on the system but may create a potentially dangerous situation because of overheating.

Be careful of chimney caps purchased from the “big box” home improvement stores. These caps, because of how they’re attached to the flue, may damage the flue lining. Also, they don’t stay on very well and, with a strong wind, they’ll go flying. Hopefully, they won’t land on your solar panels, your car, or even worse, a person. You want a heavy-duty chimney cap that’s going to stay on even in major winds. Also, these chimney caps purchased from big box stores are typically made from galvanized steel which may create rust stains down the chimney after a period of time. Most professional chimney sweeps carry special heavy-duty chimney caps that aren’t available directly to homeowners.

The chimney sweep will also install that chimney cap, saving the homeowner a trip on the roof.

Stainless steel chimney caps are recommended to prevent rusting and many caps have a lifetime warranty.

One last suggestion: Never use your fireplace to burn unwanted photos!