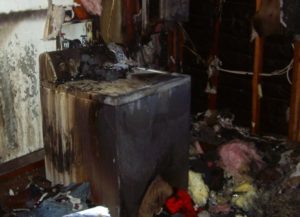 Here we are in July and we’re all enjoying the beautiful summer weather that’s common here in beautiful San Diego, but this heat has created some unintended consequences.

Due to the extreme summer heat throughout the region and the resulting high electricity usage, the manager of the state’s power grid has issued a Flex Alert Warning for the entire state of California. As part of the Flex Alert, consumers are advised to reduce electricity use from 2:00pm until 9:00pm.

Besides raising thermostats to at least 78 degrees, consumers are being urged to avoid using major appliances until early morning or late evening. One of the appliances they specifically addressed is dryers.

According to the National Fire Protection Association, there were an estimated 15,970 fires per year due to washers and dryers in the United States between 2010 to 2014. Because of the very high incidence of a dryer fire, we highly recommend that you never go to bed with the dryer running.

I know that we all should comply with saving energy during this Flex Alert by doing our laundry late at night but it’s important to stay safe as well. I speak to several people every month who call me because of a dryer fire. Yes, it happens, and it happens often enough that we should all be aware of the dangers of going to sleep while the dryer is running.

For more information about dryer safety and how to reduce the possibility of a dryer fire, check out my blog post “18 Important Tips for Dryer Vents.”

In the meantime, enjoy your summer!