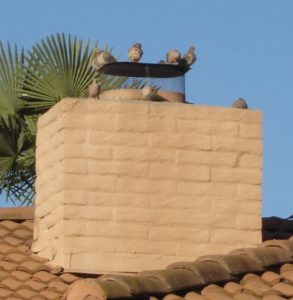 As I’m sitting in my office working, I can hear the high-pitch chirping from some obviously newly-hatched baby sparrows just above my office window. I’m not surprised by the chirping. I’ve been watching the mama bird building her nest on a ledge just above my window for several weeks. During her time building her nest, every time we walk below her nest, she quickly flies away, only to return when we are out of sight. I don’t mind the nest, nor the sound of the constant chirping of the chicks. I don’t even mind the bird poop below the nest on our walkway. It’s the circle of life and I love it.

Apparently, I’m not the only one who is dealing with new nests during the spring. We’ve been getting a lot of phone calls from homeowners who are concerned that birds are coming into the chimney. Here’s some information that you need to know.

Are the birds INSIDE the chimney?

Prefabricated chimneys have a metal flue pipe with a termination cap at the top. Birds like to hang out at the top. Their chirping through the metal flue pipe creates what I call the “Megaphone Effect.” We chimney sweeps have gone out to homes many times because homeowners insist that these feathered friends are inside the chimney, only to determine that they are just hanging out at the top. The good news is that no birds are inside the chimney.

Once the birds get into your chimney

The bad news is that if birds do get inside the chimney, they’ll fall down on top of the closed damper or behind the damper in the area called the smoke shelf. Then the bird gets trapped. Once the bird lands in the smoke shelf, it’s extremely difficult for them to get out on their own.

Once the bird has flown into your chimney, that chimney is now considered its natural habitat. This makes it a felony for anybody to remove the bird or active nest from its natural habitat without a special wildlife permit. Due to the Migratory Bird Treaty Act of 1918, there is a potential $15,000 fine per bird, nest, or egg as well as possible jail time and confiscation of any equipment or tools involved with the removal of said birds.

Chimney sweeps have been targeted by the U.S. Fish and Wildlife Service as frequent violators of these federal laws. Many chimney sweep companies simply didn’t realize that it’s against the law to remove birds from chimneys and what kind of potential heavy fines they are opening themselves up to. For that reason, we recommend contacting animal rescue organizations who have the wildlife permit.

After the birds are gone…

The best way to deal with birds getting into your chimney is prevention. Once birds are gone from the chimney and the nest has been abandoned, we recommend having the chimney inspected and swept to remove any nesting material. In addition, installing a chimney cap will prevent future birds as well as rodents and other critters from entering the chimney.

To find a qualified chimney sweep company to install a chimney cap, make sure you use a CSIA Certified Chimney Sweep through the Chimney Safety Institute of America.

We have a responsibility as humans to care for our wildlife. We can live in harmony with these precious creatures. Soon enough, I know I’ll miss that sweet chirping just outside my office window.