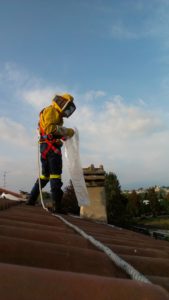 It’s that time of year again when our phones are ringing off the hook with customers calling about bees in chimneys.  If it’s any consolation, you are not alone if you have this problem.   We’ve noticed an above-average number of bee calls over the past five years here in San Diego.

Here are 15 facts that will help you in dealing with bee problems in chimneys:

1. According to San Diego County officials and local bee companies, 70%-80% of beehives in the county are now Africanized.  For that reason, we leave bee extractions to the bee experts.

2. We recommend contacting a licensed bee company as soon as possible if you see any possible bee activity, whether around the chimney or anywhere around your house exterior or yard.  Africanized bees are very aggressive and can be dangerous.

3.  Bees are important to our Eco-system.

4. Bees are the only insect that produces food for humans.

5. Our food supply is dependent on pollination from bees.  Honey bees are responsible for pollinating approximately 80% of all fruit, vegetable and seed crops in the United States. 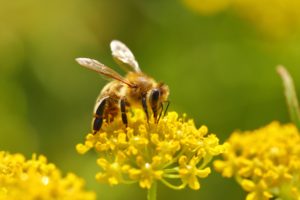 6. Not only do bees pollinate plants, but they also produce honey and bee’s wax.

7.  If at all possible, do not use a company that kills the bees. Instead, find a company that will relocate the beehive instead of killing the hive.  The San Diego Beekeeping Society has a list of local companies that do live bee removal.

9.  If you observe the bees within the first few hours, you can light your fireplace to discourage them from creating a hive.  If you wait more than a few hours, DO NOT light your fireplace because the bees will have had time to start building a hive in the chimney flue.  Lighting the fireplace with a hive present in the chimney will liquefy the wax and honey and will make it virtually impossible to clean the mess and will attract future bees.  Also, the wax and honey are combustible materials and can start a chimney fire. In addition, lighting a fire with a hive present in the chimney can cause smoke to back up into your home, resulting in smoke damage inside the house and health issues for the people and animals in the home.

10.  If you notice bees coming into your home, respond immediately.  Ignoring the bees only gets more expensive and creates more damage.  Honey can seep through the masonry and walls and can cause mold, rotting, bad odors and will attract other insects such as ants,  wax worms and bee moths.

11.  If the hive cannot be relocated, hire a reputable bee company that will also remove the hive, not just kill the hive.  Leaving a hive in a chimney will only invite more bees. 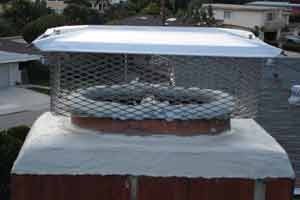 The top-sealing damper is a flat metal plate located inside the chimney cap.  The plate is spring-loaded and has a cable that comes down into the firebox and is attached to a bracket on one of the sidewalls.  When the cable is pulled down, the plate seals against a thick rope gasket.

IMPORTANT: Top sealing dampers cannot be installed on systems that have artificial gas logs or a log lighter.  Also, these special dampers are only designed for masonry chimneys and not for prefab fireplace systems or free-standing stoves or stove inserts.

We have found that top-sealing dampers have been very successful in preventing bees from entering the chimney.  However, with the aggressiveness of the Africanized bees, these bees have been known to eat through the gasket of the top sealing damper, or still be able to get past the damper plate if there are any small openings.

Keep in mind, the top sealing damper solution will only work if the bees are entering through the top of the chimney into the chimney flue.  If the bees enter through an opening in the brick or mortar or any other opening, a top-sealing damper will not work.  In that case, a hole will have to be created in the chimney structure or chimney chase to remove the hive and then sealed back up to prevent further bee intrusion.

We have to stress that with Africanized bees, a top-sealing damper is not 100% bee-proof.  It’s intended as a compromise between keeping the bees out as best as possible and still being able to use the fireplace while still keeping the chimney in compliance with building code.

Bee problems are not to be ignored.  If you’re having a bee problem in your chimney, contact a CSIA Certified Chimney Sweep for further information.