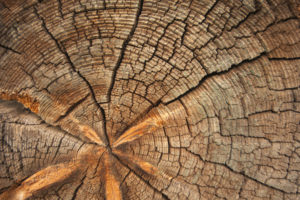 1) Only burn seasoned firewood. Wood should be aged at least six to twelve months and sometimes longer, depending on the density of the wood, species of wood, and climate.  Soft woods only need six months whereas hard woods can sometimes take up to two years.

2) The moisture content of wood should be between 15%-20%, never to exceed 25%. Homeowners can purchase moisture meters from most hardware stores.

5) Moisture in the wood is held in by the bark. Removing the bark before seasoning the wood will reduce the time to age it.

6) Aged wood will be lighter in weight than regular wood because there’s less moisture.

8) You will notice the center of the wood will crack as it ages.

9) When burning wood that hasn’t been aged long enough, not as much heat will be produced because of the loss of heat due to evaporation of moisture.

10) Don’t trust a wood supplier to be honest with how long the firewood has been aged. Firewood that hasn’t been split and/or has been just thrown into a large woodpile will not be seasoned properly.

11) Experienced wood burners will purchase firewood at least six months ahead of the season to guarantee that the wood has been aged long enough. It’s always best to buy your wood in the off-season when it will be cheaper and firewood is more plentiful.

12) Burning firewood that isn’t aged long enough will be harder to start, will create a smokier fire, will produce less heat and will create a faster build-up of creosote in the chimney flue.

13) Anytime you burn wood, creosote is created.  We chimney sweeps divide creosote buildup into three categories–Stage 1, Stage 2 and Stage 3.  Stage 1 and Stage 2 creosotes are easily removable with a normal chimney sweeping whereas Stage 3 is far more difficult to remove. Stage 3 creosote is also known as “Glazed Creosote” because of its shiny appearance and it is highly flammable and more likely to cause a chimney fire.  Glazed creosote is much more expensive to get rid of from your chimney flue lining due to the difficulty of removal.  The chances of creating Stage 3 creosote is much higher when burning unseasoned wood.

Have your chimney inspected on an annual basis and sweep if needed before using your fireplace. The best way to find a qualified chimney sweep is to go through the Chimney Safety Institute of America.