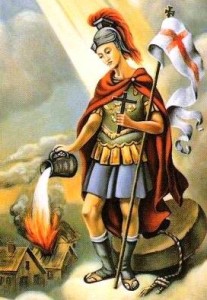 What do chimney sweeps, firemen and soap makers have in common?

Florian von Lorch was born about 250 A.D., in Austria. Florian was not only a high-ranking commander in the Roman army serving Noricum, a province of the Roman area of Austria, but he was also responsible for organizing and training an elite group of 7,000 Roman soldiers to fight fires.

He secretly converted to Christianity during a time of major persecution against Christians. When a Roman investigator discovered he was not following orders to participate in persecution against Christians in the territory, Florian confessed his religious faith and refused to abandon his religion. He was sentenced to death shortly thereafter in 304 A.D. by fire, a common method of killing Christians during that time. Before he was to be burned at the stake, Florian announced, “If you do, I will climb to heaven on the flames,” so instead of being burned, he was flogged, flayed and then drowned in the Enns River with a millstone tied around his neck.  For that reason, he’s also called upon to protect people from floods and drowning.

In some areas of Germany, the name “Florian” is equivalent with “fireman.”   Not coincidentally, May 4th is also celebrated as International FireFighters Day.

So on May 4th, be sure to wish your favorite chimney sweep, fireman and soap maker a Happy St. Florian’s Day!