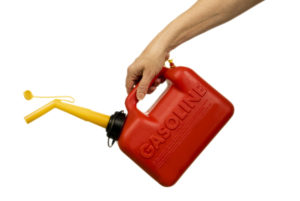 True story: When I was growing up, we lived next door to some wonderful neighbors. John (not his real name) was a California Highway Patrolman and we highly respected him. His wife became best friends with my mother. My brothers and I became friends with their four sons. One winter, John was trying to get a fire started with green wood. Because the wood had a high moisture content, he couldn’t get the fire started. John went and got a gas can and poured some gas on the wood, not knowing that there was smoldering wood below the grate from the previous night’s fire. The fire instantly exploded. John jumped back and spilled the gas can on top of himself which instantly lit him on fire. John was burned over 75% of his body and almost died. He was in the hospital for months recovering and he suffered a great deal of pain from those burns for the remaining 45 years of his life. This event had a major impact on me and every time I see or hear about someone pouring gas on a fire to get it started, I instantly think of John. If this doesn’t inspire you to be careful and watch out with gas cans, I don’t think anything will. 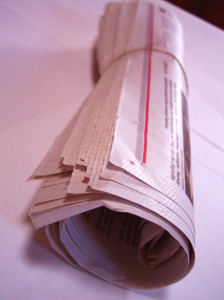 Junk mail, newspapers, magazines, and trash (such as cardboard, pizza boxes and Styrofoam) may contain plastic, chemicals, glues as well as ink that can be toxic when burned.

Identity fraud is rampant, leading people to burn credit card statements and other documents that could create a nightmare if it gets in the wrong hands. Buy a paper shredder instead. Fly-away embers from burning paper can plug up a chimney cap or, even worse, if a cap isn’t present, these embers can land on your roof or on your neighbor’s roof. Using a few pages of newspaper to start a fire is fine but avoid using the colored advertising slicks.

Wood should be aged at least six months, but better a year. To get around this, order your wood from the wood seller in the spring, have it split and stacked ready to go for when the cold season starts. Don’t trust the wood lot when they say that the wood has been aged. The moisture content in the wood should be between 15%-20%. Green wood will give you a smokier fire, will smell bad and will create more creosote build-up in the flue, setting you up for a dangerous flue fire.

In addition to the reason demonstrated above, accelerant fluids can produce a fire that can quickly get out of control and will produce a toxic odor that can damage your lungs.

Construction scraps or wood that has been chemically treated, painted or stained such as plywood, paneling or particleboard can be toxic when burned. This also includes furniture and the old wood from that deck or fence you removed from the backyard last summer.

While the Christmas tree may seem like it’s dried out, it contains resins that may explode when burned. It can quickly create a fire that is out of control.

The ink from Christmas wrapping paper can be toxic when burned. Also, the flyaway embers can either clog up the chimney cap if you have a chimney cap, or if you don’t have a cap, the embers can land on your roof or your neighbor’s roof and start a fire.

Burning plastic can create cancer-causing dioxins, a highly toxic chemical that builds up in human tissue. It also produces fumes that are harmful to your throat and lungs. The smoke can create damage to the environment.

For the same reason as burning plastic, synthetic fabrics should not be burned due to the toxic chemicals produced.

These products are only intended for outside use because of charcoal-induced carbon monoxide poisoning that can be caused. Leave the charcoal to your outside barbecue.

Smoke from plants that contain urushiol, such as poison oak, poison ivy or poison sumac, can create a serious allergic reaction to the nasal passages, throat and lungs if the smoke is inhaled.

Remember that your fireplace is not an incinerator. Buy a shredder for your paperwork and dispose of your garbage and any processed or treated wood properly. Have fires in the fireplace in a responsible way for the safety of you, your family and the environment, and stick to burning properly-aged wood in your fireplace. Don’t take unnecessary chances!

2 thoughts on “10 Things to Never Burn in a Fireplace”